Sign in
Welcome!Log into your account
Forgot your password?
Privacy Policy
Password recovery
Recover your password
Sign in
Welcome! Log into your account
Forgot your password? Get help
Privacy Policy
Password recovery
Recover your password
A password will be e-mailed to you.
News India Simple and Effective News
Home Indian Railways 12037/38 New Delhi – Ludhiana and Moga Shatabdi Express Changed to Intercity...
Facebook
WhatsApp
Twitter
Telegram
The name of Shatabdi Express running between New Delhi to Ludhiana will be changed. It will now stop at smaller stations as well. This train will be changed to Superfast Intercity Category train from October 4. After becoming Intercity, its fare will be much lower and thousands of passengers will benefit from it. Till now this train use to run till Moga City of Ludhiana, now it will further to extended up to Lohian Khas. Earlier there was only AC Chair Car in this train, now common people will also be able to travel in this train without reservation in general class.

The Shatabdi Express which was running between New Delhi to Ludhiana does not had general class seats. The train itself has breakfast, lunch and dinner facilities. As per the decision taken by the Railway Ministry from October 4, six coaches of general class will be added to this train.  The name of this train has been changed from Shatabdi Express to Intercity Superfast Express.

The train will depart from New Delhi and stopping at Shakurbasti, Bahadurgarh, Rohtak, Jind, Narwana, Jakhal, Sangrur, Dhuri, Ludhiana, Moga, Jalandhar City, Sultanpur Lodi to Lohian Khas. This train will aslo have halt at Narwana and Jakhal, which was not there before. 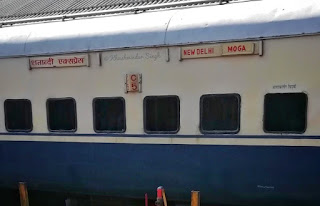 After the Shatabdi Express becomes Superfast Intercity, its fare will also be reduced. Earlier, where till Ludhiana used to be 500 rupees, now the fare would be only 90 rupees. Jind to Tohana Rs 50, Rs 60 for Jakhal, Rs 70 for Sangrur. Though it will also have an AC Chair Car coach but six coaches will be of general category. Instead of reservation, you can also travel on this train by taking unreserved tickets from the station. Earlier, ticket booking of this train was not available at Jind railway Junction.

Railway Mains Union branch secretary Ravi Chopra said that for a long time there was a demand for the Shatabdi train to extend this from Ludhiana to Jalandhar. Railways have decided to extend this train till Jalandhar and Lohian Khas by making this train intercity in view of the sentiments of the passengers. This will benefit thousands of pilgrims and devotees.

Railways has decided to change Shatabdi Express to Intercity Superfast  running between 12037/38 Ludhiana to New Delhi and train number 12043 and 12044. The first run as Intercity Express will be from 4 October. Train Schedule has been also released.