The train composition consist Nine Sleeper Coaches, Three AC 3 Tier, 1 AC 2 Tier and 5 Unreserved Coaches. Train will depart from Bhagalpur at 10:00 PM on Tuesday and Friday and will reach final destination Howrah next day in the morning. At the same time, the train will depart from Howrah at 10:15 PM on Wednesday and Saturday and will reach Bhagalpur next day at 7:00 AM. Eastern Railway has issued official notification for this train. 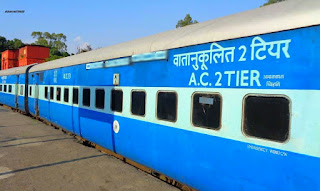 The running of this train will benefit to passengers a lot. Because of one more train from Bhagalpur to Howrah, congestion in Kaviguru, Super and Gaya-Howrah Express will be less. After departing from Bhagalpur, this train will stop at Kahalgaon, Sahibganj, Barharwa, Rampurhat, Barddhaman, Bandel and final destination Howrah.