RCF currently has 40 such non-AC coaches ready to be transferred to the isolation ward after two to three days of effort. A coach will have two or three isolation beds, which is under consideration.

Ravinder Gupta, General Manager of RCF Kapurthala, which manufactures about 40 percent coaches of the Indian Railways, has received a letter from the Railway Ministry in this regard. Design work has been started with immediate effect on it. RCF already manufactured 40 coaches before the lockdown, which not dispatched yet. GM said that now work is on to convert these coaches into isolation wards within two or three days. On the instructions of Ministry of Railways, the employees of Northern Railway and Eastern Railway working day and night. 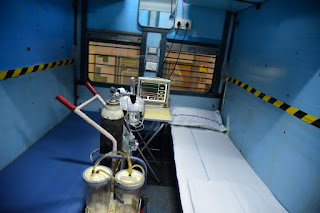 He told that a coach consists of eight cabins, but not all can be used as there should be separate bathroom for the Coronavirus patient. Because of this a coach will have two or three isolation beds. This matter is under consideration.

For doctors, special arrangements will be made in the coach itself. Expert doctors are also being consulted in this regard and it is still being discussed. It is notable that a coach has four bathrooms.

GM said that two and a half to three hundred masks have also been made on behalf of RCF as a trial. Apart from this, work is also going on to make ventilator. The ventilator we have designed will be much cheaper.