Under Make in India Project, Indian Railways has built high speed trains like Vande Bharat Express and Tejas Express Coaches. Both are running successfully. Electric Locomotive Factory, Madhepura has assembled WAG 12 with a capacity of 12000 horsepower. This electric engine can run at a speed of 120 kmph with 100 bogies. 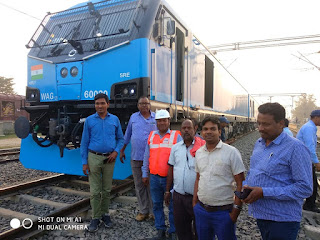 The Final trial of this engine is to be conducted by Research Designs and Standards Organisation (RDSO). After successful trials, a target has been set to produce 10 engines by the financial year 2020-2021. With this engine, Iron Ore, Food Grains, Cement, Coal etc. can be transported from one corner of the country to the other in a short time. Trains with this engine can also run at speed like Rajdhani.

Senior Divisional Electrical Engineer (TRD) Jitendra Kumar informed that WAG 12 is ready for trials. The task of trial and handling to RDSO has been entrusted to the Moradabad Railway Division. Engine trials are to be conducted in the same Railway Division.