The Ahmedabad-Mumbai Tejas Express is India’s Second Private Train Operated by IRCTC. It was inaugurated by Railway Minister Piyush Goyal on 17 January and normal run from 19 January. On Wednesday, the train left Ahmedabad at 6:42 AM and reached Vapi at 10:53 AM. However, the reason is being stated as a technical problem. It was repaired between Dahisar and Mira Road at 12:30 PM and train operation started at 1:35 PM. 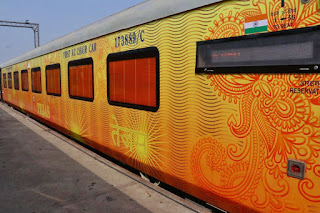 IRCTC Spokesperson said that the train reached Mumbai Central about one and a half hours late, for this compensation will be given to the passengers according to our policy, although this refund will be paid after verification. According to Railway officials, the Ahmedabad-Mumbai Tejas Express departed from Ahmedabad at 6:42 AM with a delay of two minutes. It was supposed to reach Mumbai Central at 1:10 AM but it reached at 2:36 PM.