IRCTC will give you insurance of up to Rs 1 lakh if ​​there is theft at home during the journey in IRCTC operated train.
You don’t need to pay any premium charges for this insurance cover. This facility is currently only for Lucknow – New Delhi Tejas Express passengers. If there is theft done at home, then you just have to register an FIR and IRCTC will give you the insurance amount after being found correct in the investigation. IRCTC has tied up with Liberty General Insurance Company Limited. In future, IRCTC is also planning to provide similar facilities in its upcoming private operated train. In January 2020, IRCTC is going to run the next Tejas train on Mumbai – Ahmedabad route. 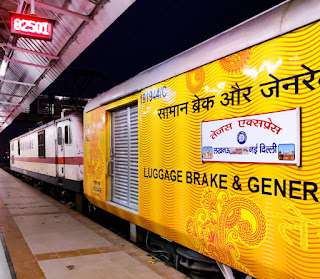 According to IRCTC, since the Tejas Express train has automatic doors, it is less likely for an unknown person to climb. Along with this, private security guards are also deployed in train. CCTV cameras are also equipped in trains. The Lucknow – New Delhi IRCTC Special Tejas Express train is the first Private train of the country.