Sign in
Welcome!Log into your account
Forgot your password?
Privacy Policy
Password recovery
Recover your password
Sign in
Welcome! Log into your account
Forgot your password? Get help
Privacy Policy
Password recovery
Recover your password
A password will be e-mailed to you.
News India Simple and Effective News
Home Humsafar Express Sleeper Coaches in Humsafar Express Fleet on High Demand, 3AC Berths Vacant
Facebook
WhatsApp
Twitter
Telegram
Good news for the travelers of Jabalpur. The first Humsafar Express of Jabalpur Railway Division, West Central Railway which runs every Thursday between Jabalpur to Santragachi, started running with Sleeper Coaches. To give relief to the common passengers, the Railway Board has initially installed two sleeper coaches in this train. The seats of the sleeper coach  fully booked in few minutes as soon as the coach installed, then AC coach seats are vacant. The situation is that between 16 and 30 January, 5 trips in up and down of the train to be done, in which there is RAC and waiting in the Sleeper, while in 3AC more than 700 seats are vacant. 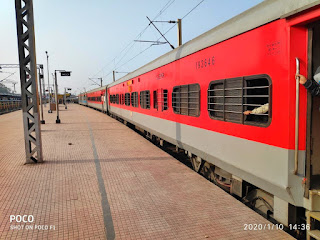 The Humsafar Express, which runs between Jabalpur to Santragachi, does not have a special but dynamic fare. That is, like flight, the fare increases as the seats increase. While the 3AC fare from Jabalpur to Santragachi is Rs 1425, due to the dynamic fare, it reaches Rs 4000. Due to this, passengers do not make reservation in AC coach of this train. However, to give relief to the passengers, the railways have decided to remove dynamic fare and install Sleeper Coaches in Humsafar Express Fleet. 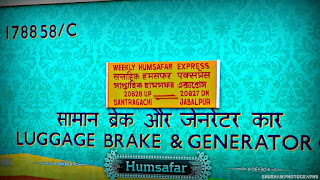 Special step has been taken for the convenience and safety of passengers in Humsafar Express. There are CCTV cameras in every coach for security. Not only this, as soon as the chain is pulled in the train, the driver and guard get to know in which coach chain pulling has been done. Apart from this, LHB coaches are safe and reduce the loss of life and property in the accident by 90%. Every coach has modern and comfortable seats, bathrooms and beautiful coaches which makes Humsafar Express as India’s Most Beautiful Train.