As soon as the information was known, to officials and employees of the West Central Railway Employees Union protested and held siege to the concerned officials. The union alleged that the officers have purchased a large number of expired soaps in the wake of the commissioning, action should be taken against such corrupt officers. 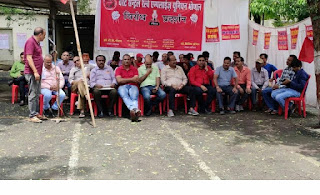 Taking cognizance of this, on Tuesday 03 March, the WCREU Main Branch surrounded ADME Vijay Singh and SSE(G) Eric Minj and demonstrated protest by placing expiry soap in front of them. Seeing the anger of the employees, ADME Vijay Singh immediately instructed to give good quality soap and change the expired soap and assured that such mistake will not be repeated by the store. The protest was mainly attended by a large number of employees including WCREU Main Branch Secretary Ramesh Mishra, Chairman Jarnail Singh, Sheshapal Meena, Ravi Gautam, Satish, Ramesh, Kamlesh, Jeetendra, Tara Singh, Nishant.