Sign in
Welcome!Log into your account
Forgot your password?
Privacy Policy
Password recovery
Recover your password
Sign in
Welcome! Log into your account
Forgot your password? Get help
Privacy Policy
Password recovery
Recover your password
A password will be e-mailed to you.
News India Simple and Effective News
Home Bhagalpur to Pune Train Soon New Weekly Train from Bhagalpur to Pune via Jamalpur, Kiul, Patna,...
Facebook
WhatsApp
Twitter
Telegram
New Weekly train will run from Bhagalpur to Pune. The proposal has been approved by the Railways. It will run on every Tuesday from Bhagalpur. The train will depart from Bhagalpur on Tuesday night and reach Pune on Thursday. The train will have all Classes of Coaches. It will run via Jamalpur-Kiul-Patna-Pt.Deen Dayal Upadhyaya Station. The churn has started regarding its timing and stoppage. New Time Table of railway will be applicable in July. It is expected that it will give the green signal to operate new train for Pune.

Actually, the Railway Time Table Committee Meeting held in Bengaluru from 26 to 28 February. Officers involved in the operation of all zones were present. The meeting discussed trains running in the country. There was also discussion about the new train between Bhagalpur-Pune.

A large number of people of East Bihar reside in Pune. Running this train will help passengers as well as the students. Thousands of families from East Bihar live in Pune. They have to face a lot of difficulties by changing trains while traveling to hometown. 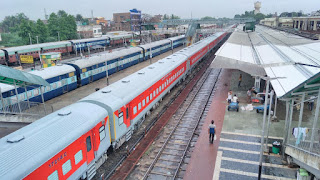 There was a long time demand: The demand for new train between Bhagalpur to Pune was going on for a long time. Every time passengers were getting assurance. Currently there is not a single train from Bhagalpur to Pune. In such a situation, people here have to go to Patna to board the train. In addition to this, train from Bhagalpur will also help the passengers of Munger and Lakhisarai district.

The Railway Time Table Committee has proposed a new train between Bhagalpur-Pune. Officers are churning on this. The train is expected to run from July.